Alfred Hitchcock’s, “Psycho” is perhaps his most famous film and in my opinion one of the greatest horror films in history.  However, it is so much more than just a horror film; it is a masterpiece involving so much detail and hidden meanings.  Although I have seen this film several times, I still learn something new each time I watch it, which is what makes many of Hitchcock films so great.  Anyone who has watched Hitchcock’s films can admit that he a genius and one of the greatest directors ever!

One thing we notice in this film is the significant abundance of mirrors used.  Mirrors, not only can be used to represent split personalities in a character, but also can be used to see the world and ourselves more clearly.  In Psycho, several characters are reflected through mirrors.  Marion is reflected in her office, in her house, at the hotel and even in the car as she glances several times through the rear view mirror. Marions reflections may represent the battles she is having within herself.  She has a sense of guilt for stealing the money, however she still does it. Norman, is also another character reflected through mirrors many times. Only in his case it is a way to represent his split personalities.  But the most frighting of all the mirror images was the one of the double reflection of Lila in Mrs. Bates bedroom.  This immediately lead us to believe that there is something terribly wrong and that perhaps Mrs. Bates or Norman are not who they say they are.

Another popular affect used in Psycho, was the splitting or cutting of images.  Marion splits the picture of the Phoenix horizon at her job. There was also the cutting in the shower scene, the blinds split the characters in certain scene and Marions cars is split by a telephone pole.  Hitchcock used these imageries to represent the split of the minds of the characters and the audience watching the film. 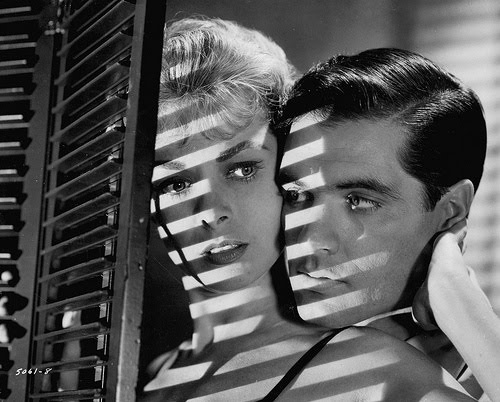 WE ARE ALL VOYEURS

A common theme in many Hitchcock’s films is the idea of whose “looking”.  In fact Hitchcock played with this theme a great deal, because not only do the characters in the film often secretly “look” at one another, but the audience is also participating in the looking and Hitchcock was well aware of this.  For example when Marion steals the money, although we know it is not the right thing to do, inside we secretly hope she does not get caught and are even angry at the policeman for being so suspicious.  We also have divided feelings about Norman. Since he comes off as the one being controlled, we feel sorry for him even when he cleans up after his “mother” kills Marion.  We even hope that the car in the river does sink even if it is wrong of us.  Not only are we accomplices in the crimes committed, but we also approve the covering up of a horrible act of madness! So it is true, in fact that we are all voyeurs, sitting in our seats watching others, as did Norman when he watched Marion through the peep hole. The most important scene of the watching theme, was the shot of Marion’s eyes after she was killed. She watched, what the audience was still unaware of. That the actual murderer was not Mrs. Bates, but Norman dressed up as women.

If it wasn’t for Bernard Hermann music, this film may not have been as great as it was.  Not only is the main song historic, but all the sounds had a great deal of influence on the quality of the film.  Something very interesting I read once before, was on the song played during the shower scene.  Hermann used a sound that resembled that of a screeching bird. Bernard Hermann had worked on several other Hitchcock films and may be one of the greatest film composers ever.

Alfred Hitchcock must have had some sort of fixation for birds because he used them in many of his films.  In Psycho especially we notice this reoccurring bird theme.  They are on many of the photos, Norman’s hobby was to kill and stuff birds and they are also mentioned several times throughout the film.  The theory is, that since birds are scavengers that prey on helpless animals, they represent Norman preying on the helpless characters in the film.  Norman had even taken the role of a bird which was depicted through the birdlike shadows of him on the walls, as well as through his eating habits (because after all, as Norman mentioned that birds eat a lot and so did he throuhout the film).

One thing I noticed this time that I never noticed before was how the photos and paintings on the walls seemed either alive or able to tell the future.  Many times through out the film, especially when the characters were guilty of something, the people or animals in the pictures would be facing them, as if the were ashamed.  Also when Norman murdered Marion and the bird picture fell, it seemed as if it was trying to look into the bathroom. Another scene was when Marion was leaving the office and walked past the painting of the Phoenix horizon and then the painting of the river where she would inevitably end up in.

Norman also removes from the wall a painting of “Susanna and the Elders” which is a biblical story of the three old men who spied on a women preparing for her bath.  They were then taking over by passion and leaped out at her with threats of sexual blackmail.

This is theme depicted in Psycho, as well as many of the other films we’ve watched.  The fact that people are constantly chasing this idea of the American dream but never really achieving it is a very important theme.  Marion goes as far as to steal so that she is able to reach this “dream”, but is also unable to fulfill it.  Norman sums it up when he says ” I think we’re all of us clamped in our private traps. We scratch and claw, but only at the air, only at each other, and for all of it we never budge an inch”.

Later on this idea of money solving everyone’s problems is destroyed.  It is even more ironic that everyone thinks Norman killed Marion for the money, but to their surprise he really did it out of “passion”.

Psycho is a film with so much substance.  It is not only a horror film, but a film that reveals all of humanities flaws.  Every character in the film was hiding from something; Marion from the stealing the money, Marion’s co-worker was hiding the tranquilizers, Cassidy hides undeclared checks, Marion’s boss hides whisky in the office and Norman hides his madness.  We all have things which we hide in our lives and this film opens our eyes to this.